Your Breath of Life Part 1: Why Deep Breathing Is Important

You are here: Home / Lymphological Healing / Your Breath of Life Part 1: Why Deep Breathing Is Important 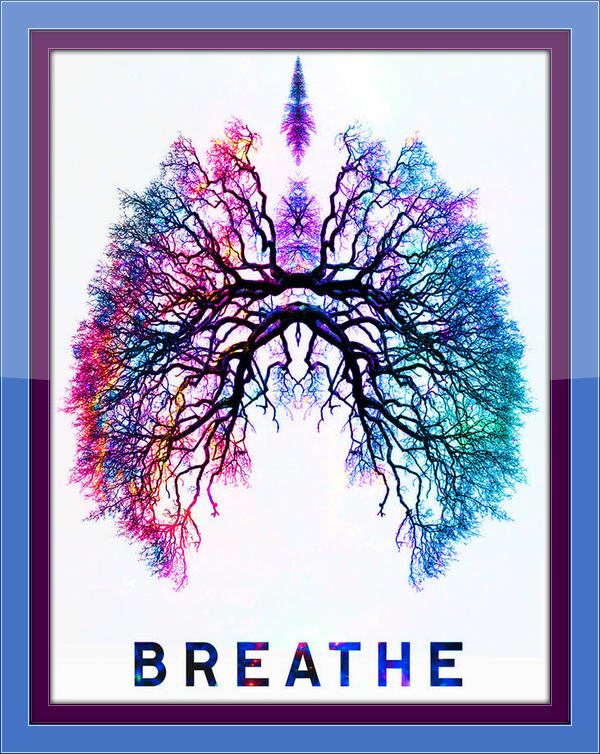 “The main thing that activates your lymphatic system is ‘deep breathing!’ So the breath of life moves the ‘tree [lymphatic system] of life.'” ~ Dr. C. Samuel West, D.N., N.D., Introduction to the Science of Lymphology & the Art of Lymphasizing, p. 27

Deep breathing is the act of consciously controlled breathwork involving slow, deep inhales (generally through the nose) allowing air to fully permeate, fill and expand the lungs- followed by slow exhales (through the nose or mouth). It can be done while standing upright, sitting upright, or while lying in a horizontal position. One is often instructed to breathe so that the diaphragm (the muscle that separates the thoracic cavity – which contains the lungs – from the abdominal cavity) will fully descent causing the muscles surrounding the abdominal cavity to be pushed outward. There are many variations of the inhale and exhale techniques, as well as overall variations in breathing pace, position, and posture. Some techniques will be shared throughout the 2nd and 3rd installments of ‘Your Breath of Life’.

It is without question that oxygen is our foremost primary fuel for sustenance of life. Without food, we can last for a substantially long time depending on the internal purity and efficiency of the body, as well as adequate liquid intake. Without both food and liquid, the average person will last only a short frame of time (3 to 5 days it is usually stated) while a select few individuals, Brother Air (Willie Smart Jr.), being a prime example, have achieved a level of efficiency permitting them to effortlessly subsist for weeks at a time without ingesting any food or liquid (often referred to as dry fasting).

“As I mention above, fasting is relative. When Brother Air—who has practiced the Mucusless Diet for over 30 years—dry fasts, it is very different from when other health seekers do it. Having removed the obstructions from the cells of his body, he is ready to dry fast and truly benefit from it on a long-term basis. I think his longest stint was over 40 days dry and he often does shorter ones regularly. It is just not a big deal for him at this point. In fact, he has been shifting between dry and juice fasting for the past couple of months and endeavors to do another extended fast.” ~ Prof. Spira, Dry Fasting and the Cyclical Nature of the Transition

But without oxygen, we would die in a matter of minutes, and there is no way to circumvent that.

The typical “healthy” adult has a respiratory rate of 12-20 breaths per minute or 17.280-28.800 breaths every 24 hours (as a side note: Dr. Morse’s clinic considers a person with a constant necessity for 21+ breaths per minute as being short of breath).

Many people do not receive the full benefits of this fascinating, free and inherent ability that came with the set of lungs we’ve been given, because they simply neglect to utilize the full capacity of their lungs.

“When babies are born, the doctor slaps their bottoms to get them to cry. The first cry is truly ‘the breath of life.’ That is what a baby has to do to get its lymphatic system moving on its own. It takes ‘the breath of life’ to activate ‘the tree of life’ inside the body. This is why the shallow breather is in serious trouble and why the average life span after retirement is 3-5 years.” ~ Dr. C. Samuel West, D.N., N.D., The Golden Seven Plus One, p. 146

As stated by Dr. West, the shallow breather is in trouble. The problem generated by shallow-breathing is multifaceted, and it is as follows:

To produce the fuel for the cell (adenosine triphosphate or ATP) needed to turn on the sodium-potassium pumps to generate the electrical energy that gives the cell the power to work, each cell requires oxygen and a simple sugar (fructose/glucose) to convert the oxygen into energy. When a person shallow breathes, the blood is poorly oxygenated compromising the amount of oxygen available for the cells and resulting in lower energy-production.

In 1979, American lymphologist Dr. Jack W. Shields, M.D., from Santa Barbara, California conducted a study at the 7th International Congress of Lymphology in Florence, Italy, which demystified the main propulsion of lymph flow (at the time there was a raging debate going on concerning what activated the lymphatics): deep diaphragmatic breathing.

Jack Shields was the first person to ever photograph the lymphatic system (lymphography). They had a person get up on a treadmill and start walking and jogging. They were photographing inside the person’s chest right where the thoracic duct comes up toward the base of the neck. The thoracic duct is the largest lymphatic vessel in the body (as big around as a regular drinking straw); it begins as a series of tubes (lymphatic vessels) that increase in size as they travel from the feet and upward to the navel. The biggest tube (thoracic vessel) starts at the navel (belly button) and comes up the center of the chest between the lungs.

It was noted that walking didn’t produce any significant effects while exercise (jogging) only increased lymphatic flow slightly. They had the person get off the treadmill and then take a deep breath. At the peak of inhalation, the lungs put pressure on the thoracic duct which caused the thoracic duct to “shoot like a geyser.” As the story goes, Jack Shields jumped out of his chair and shouted, “There it goes, there it goes!” It was then conclusively proven and the debate among lymphologists was settled. Out of the one-hundred-and-one ways lymph circulation can be improved, deep breathing is the main force that activates and accelerates this system, and it does so by compressing the thoracic duct, creating a vacuum or suction effect. This effect takes the pressure off the top of the millions of one-way check valves that line the lymphatic vessels (these prevent lymph fluid from flowing backwards) and pulls the lymph fluid through the bloodstream.

Dr. West was later noted for stating that walking (without deep breathing) only improved lymph circulation “enough to keep you alive-sick, but alive!” (‘The Golden Seven Plus One’ p. 145)

“Deep diaphragmatic breathing stimulates the cleansing of the lymph system by creating a vacuum effect which pulls the lymph through the bloodstream. This increases the rate of toxic elimination by as much as 15 times the normal rate.” ~ Dr. Jack W. Shields, M.D., Lymph, lymph glands, and homeostasis. Lymphology, v25, n4, Dec. 1992, p. 147

Volumes have been written on the benefits of deep breathing including its renowned ability to induce relaxation and calmness, stress reduction, lowering of blood pressure, and relief of pain. It supports greater energy production (hence many feel refreshed and energized after a session) throughout the body at the cell level and activates the lymphatic system; one could say these are the two main effects that lead to ALL the other [healing] benefits people associate with deep breathing. And of the one-hundred-and-one deep diaphragmatic breathing techniques and methods taught out there, the main point to always keep in mind is how the “breath of life” moves the “tree of life” at the peak of inhalation. Any breathing technique that makes you fully expand your lungs will work.

As with anything else that activates and accelerates the lymphatic system, proceed with caution. Transition is key. Some people may feel sick, nauseous, dizzy/lightheaded, vertigo and so forth after only a few deep inhales. If that is the case it goes to show that you need it badly, but must approach things slowly. Start with as many breaths as you can handle, then stop and take as long a break as you need before resuming. Before you know it, you can take 5, 10, 20, 50, or 100+ deep breaths without feeling any discomfort.

“[…] some of you may get woozy and light-headed from taking a few deep breaths. If this happens, do not be alarmed. All that means is that you need it badly.

As with the nutrition program, you must understand that the more you do it, the better you’ll feel and the better you feel, the more you’ll be able to do it. Why is this statement true? Because the lungs act as a ‘suction pump’ for the lymphatic system. Deep breathing will help remove the trapped proteins and turn your generators [sodium-potassium pumps] on.” ~ Dr. C. Samuel West, D.N., N.D., The Golden Seven Plus One, p. 25

Just like your body was made to MOVE (not just to “exercise for 20-30 minutes 3-7 times per week”), you’ve been given a set of lungs to BREATHE (not just practice a few deep breathing sessions per week).

The goal is to become conscious of deep breathing and to breathe deeply everywhere you go and as often as possible WITHOUT creating stress.

Whatever you may be trying to heal, deep breathing will support the healing process. Dr. West announced: “Every healing art on earth involves getting oxygen to the cells!“ and, to add on, activating the lymphatics on one level or another (some methods work better than others).

“One must try and stay as focused as possible because it is easy to get sidetracked. Please remember that certain members of our [mucusless diet] community, like Brother Air, have proven beyond a reasonable doubt that the nutrition theory, vitamin theory, protein theory, and any other theories about the health and wellbeing of the human body established by the medical ‘witch’ science are totally wrong. On our own bodies we have proven that it [the body] is indeed an air-gas engine, and that the only way to return back to this state is to retrace our steps through transitioning from whence we came. Understand that the use of food loosens and eliminates dead matter from the body enabling the bloodstream to more effectively use oxygen. As the bloodstream is oxygenated it is truly cleaned—so in essence food only helps get rid of waste that prevents the bloodstream from cleansing itself. Once the bloodstream is clean enough, air alone will be the only stimulant that you need.” ~ Prof. Spira, Spira Speaks: Dialogs and Essays on the Mucusless Diet Healing System, 2nd ed., p. 180

”Learning how to breathe correctly is vital as well. You notice if you start deep breathing enough, you’ll start to cough up some mucus; so we know that oxygen and carbon helps to break up mucus. Remember, don’t breathe thoracically [shallow breathing], breathe abdominally. When you take your first breath, you want your [lower] abdominal muscles to move.” ~ Robert Morse, N.D., from Questions & Answers 223